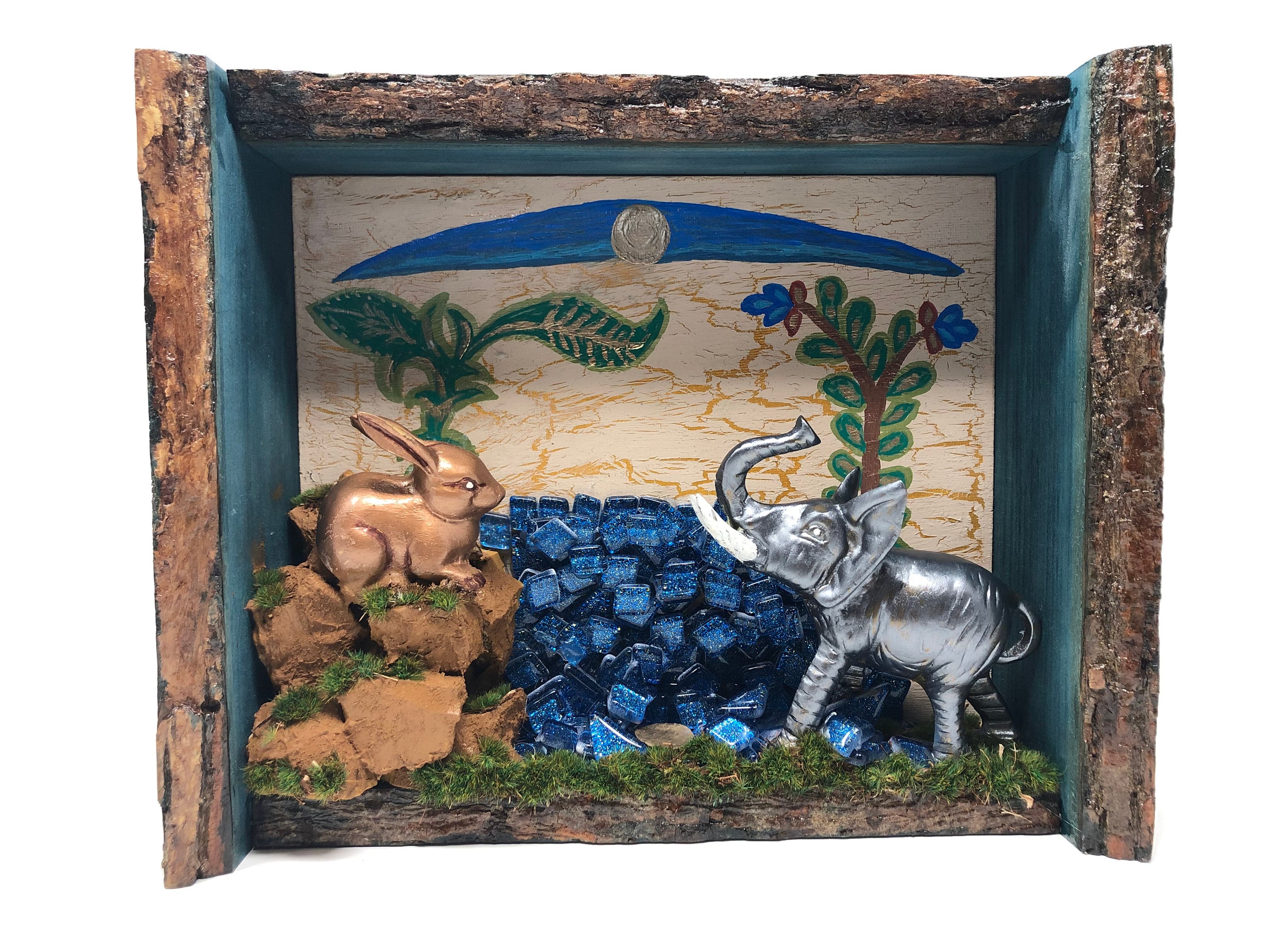 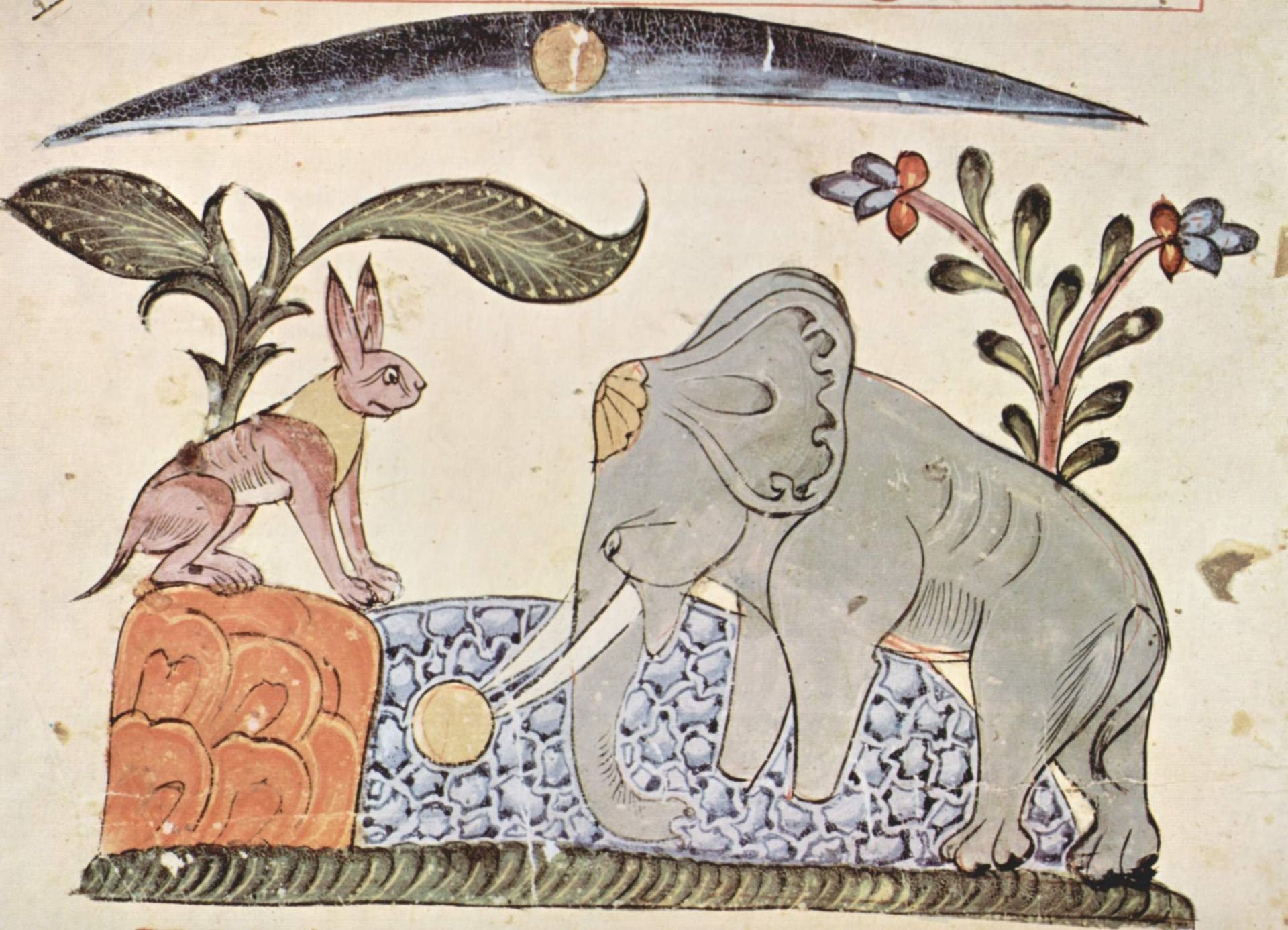 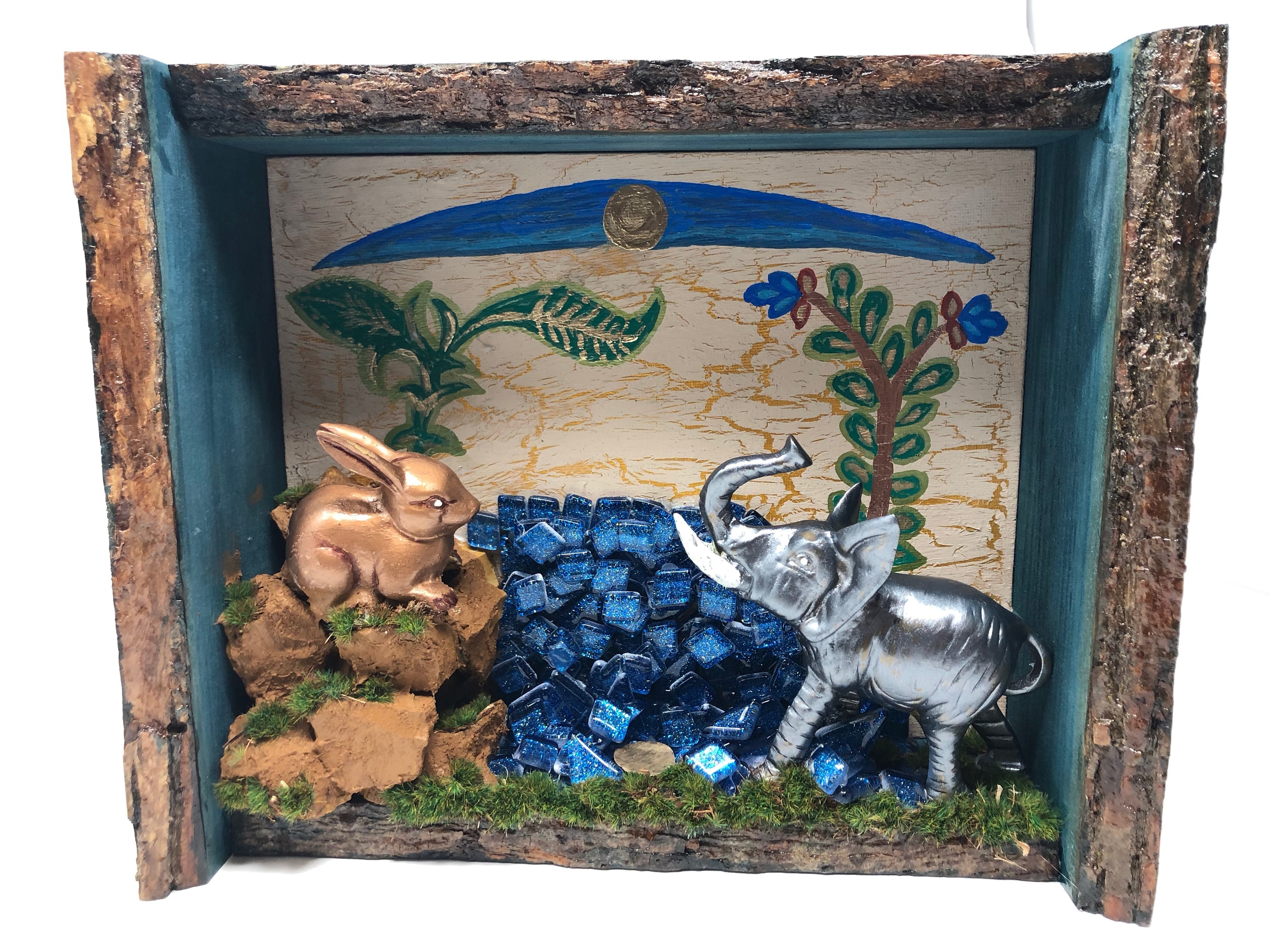 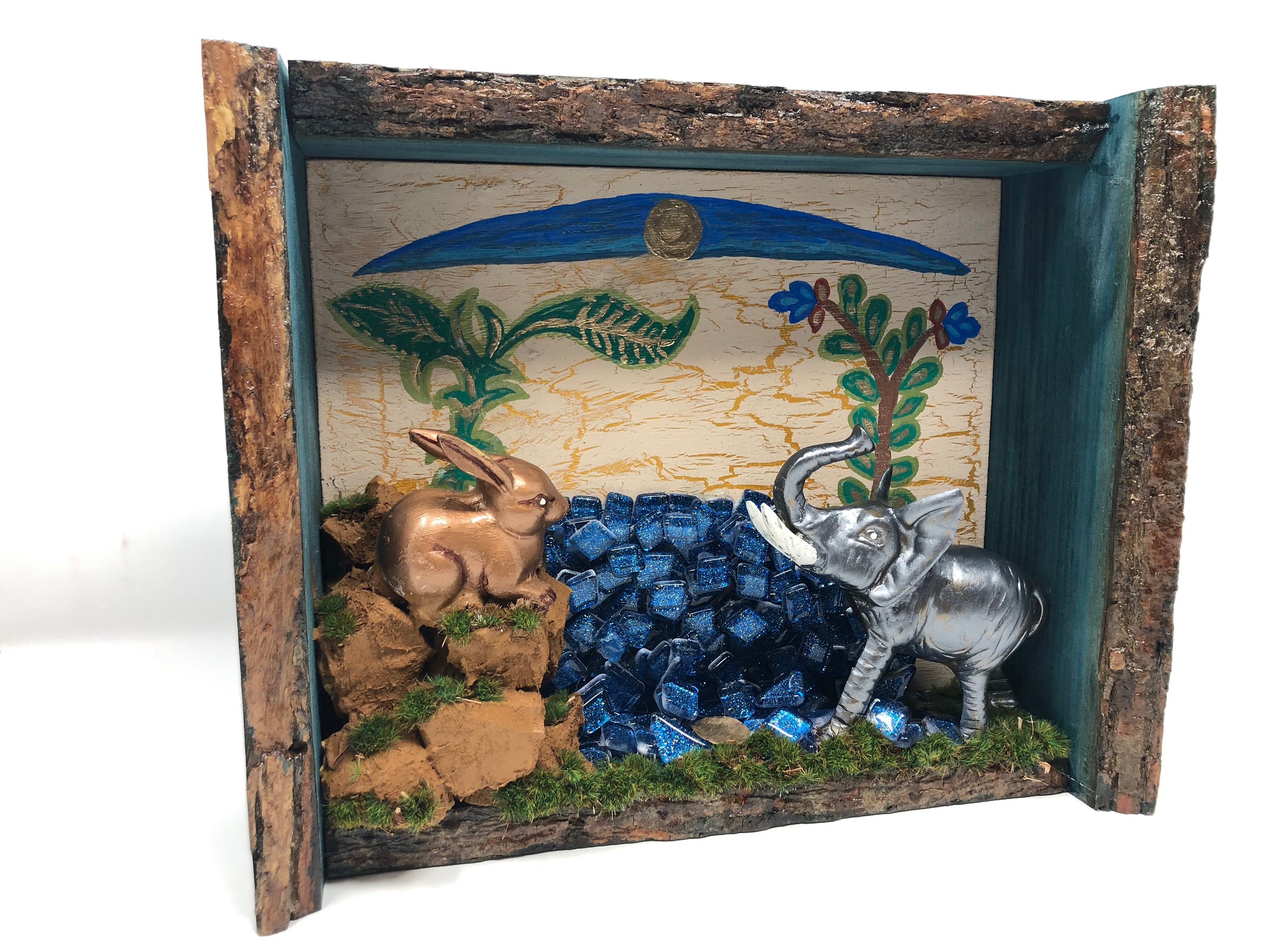 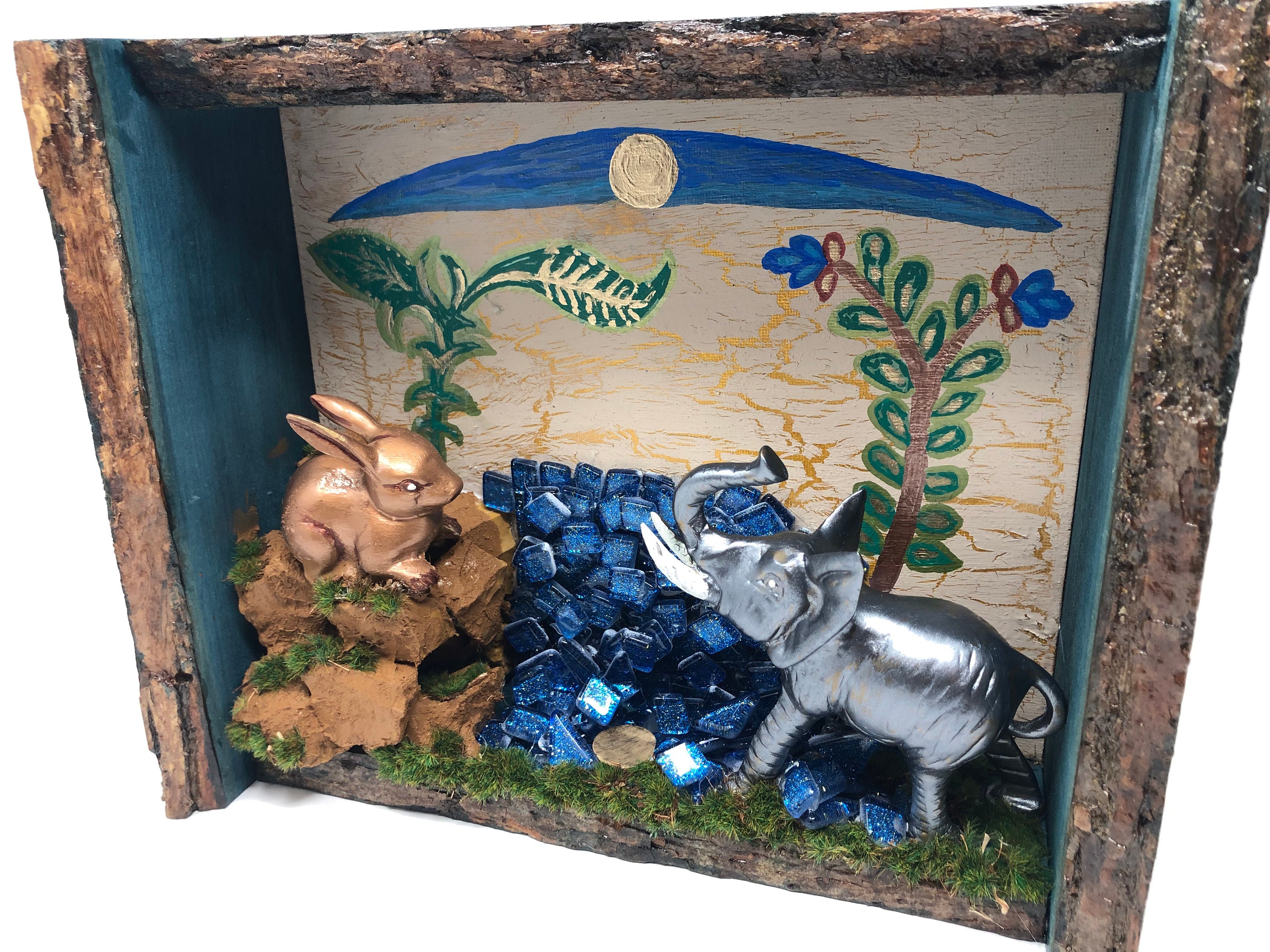 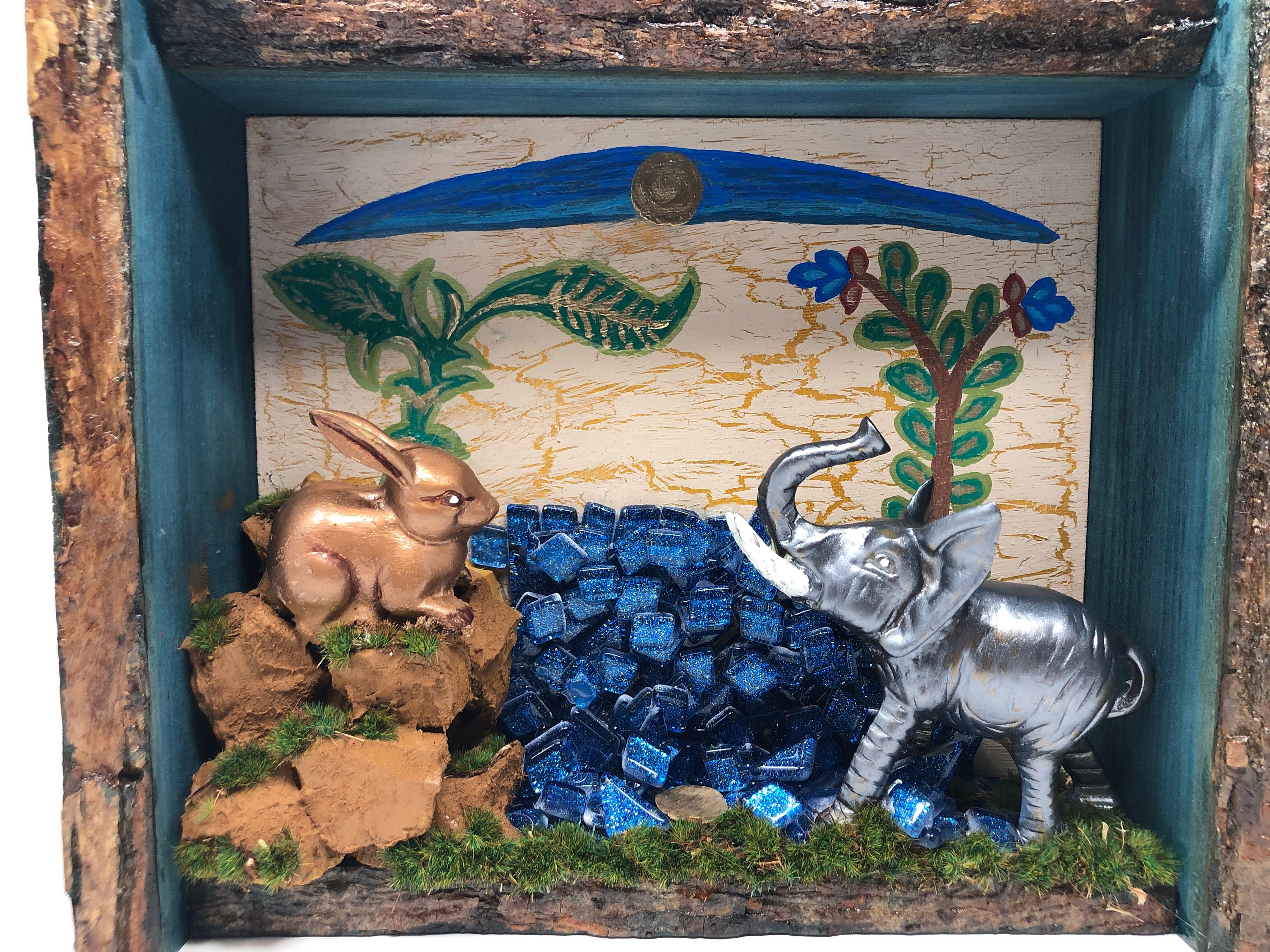 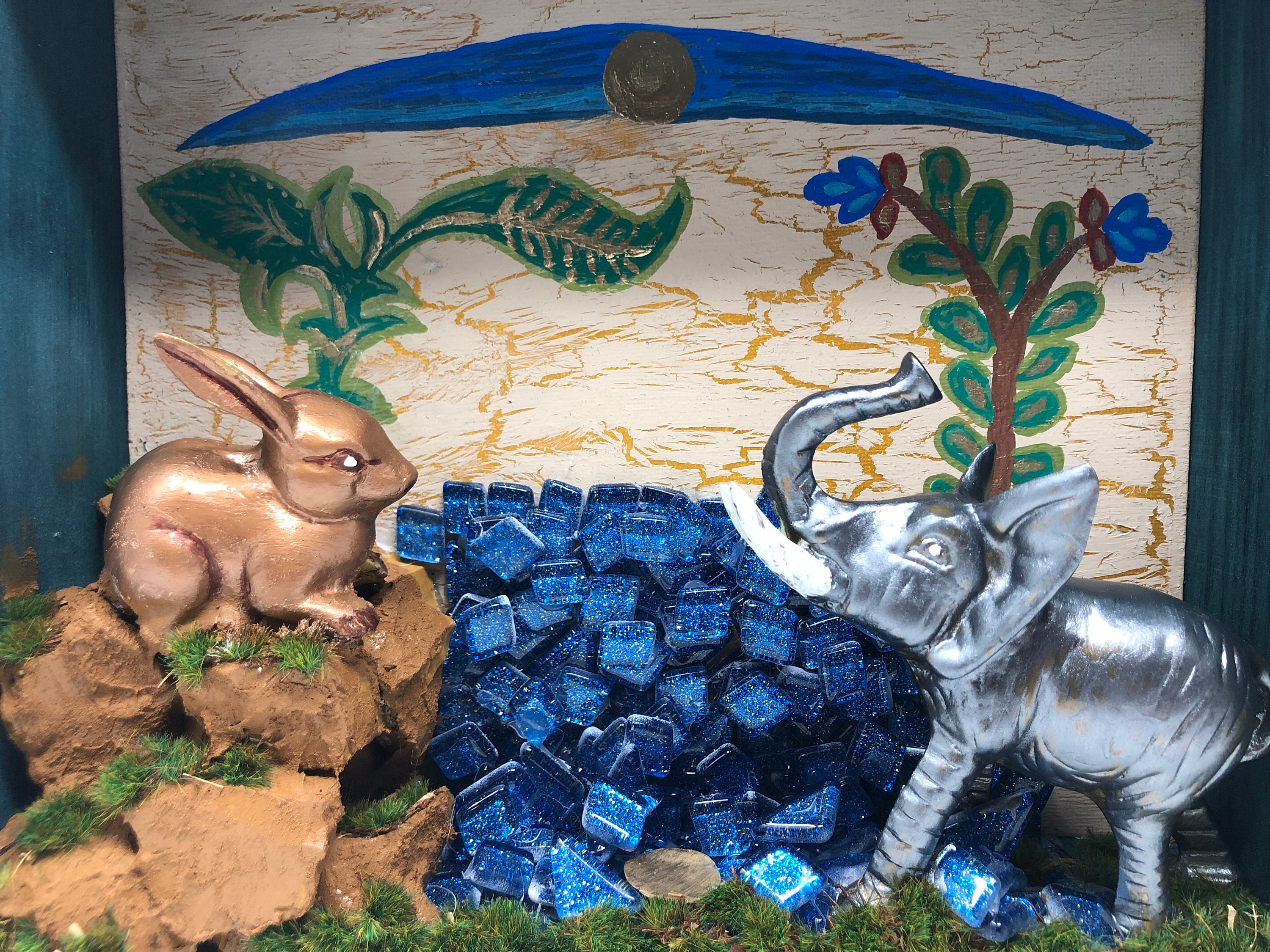 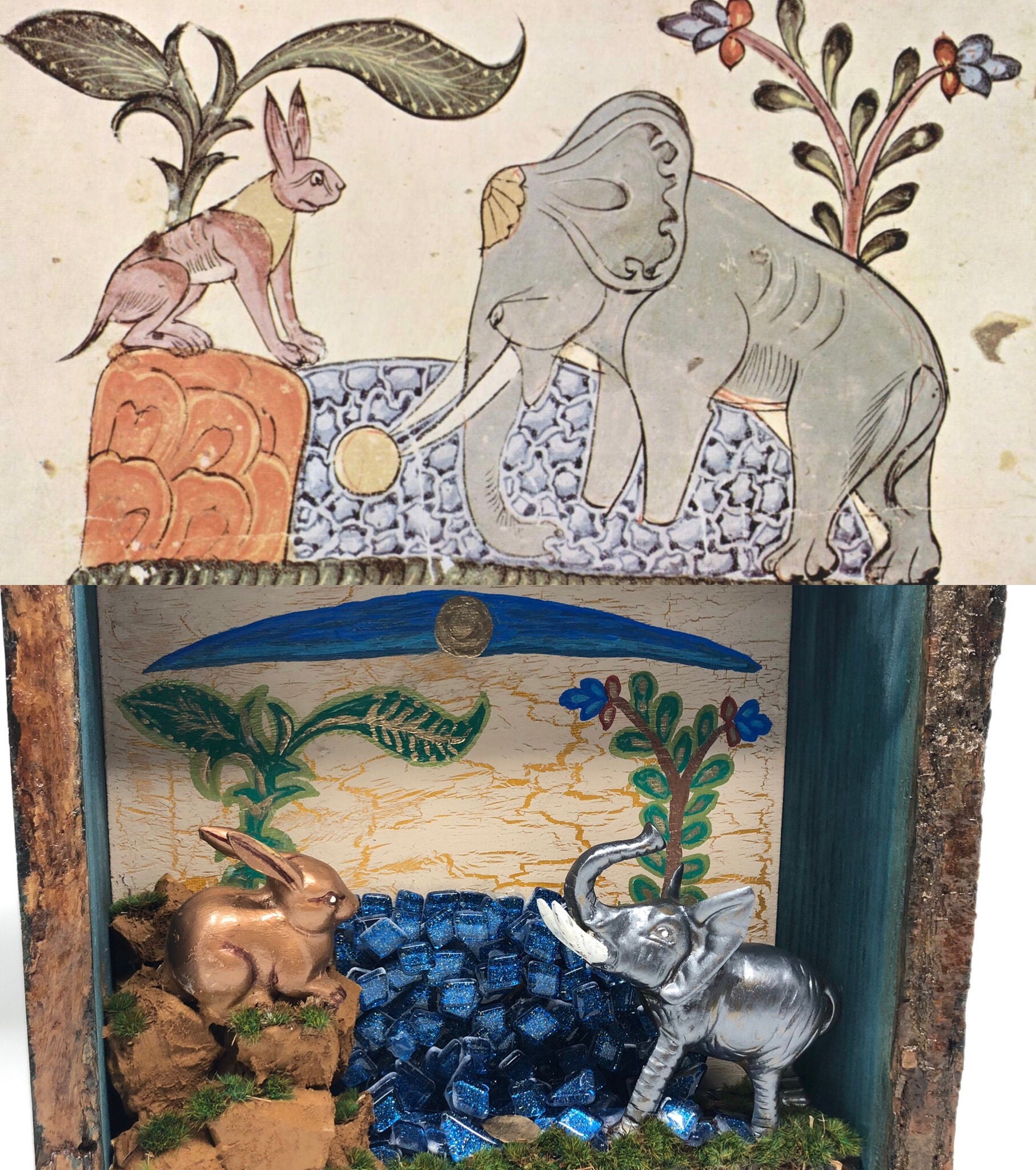 This shadow box diorama brings several artistic elements together using mixed media to recreate a 14th century manuscript page from the Kalila wa Dimna. The scene which we have recreated is from the story of the Hare and the Elephant. The story is ancient and has it roots in old Indic tales which were brought over to Persia and then translated into Arabic in the eighth century and ninth century by an Abbasid courtier and philosopher named Ibn al-Muqaffa. This particular story celebrates the victory of mind over matter, and wit over strength. The old story is as follows and was then readapted in the Kalila wa Dimna:

Once upon a time, there lived a herd of Elephants in a forest. They were led by their mighty king. The elephants' home was located by a big lake in the middle of a forest. All the forest animals used to go to drink water and to take a bath at this lake. But overtime, the lake dried up. The elephants decided to relocate their home. They found a new home near a large lake which full of water in a far-away jungle.

The King of the Elephants was happy to know that there was a new place that they could make home. He told all the other elephants to go towards the lake. However, there was a colony of rabbits already living at the lake and to make their way there, the elephants would have to cross the rabbit colony.

The elephants made their way and as a result, they crushed the homes of the rabbits under their feet when they marched towards the lake. The king of the rabbits called a meeting to devise a plan to stop the elephants' advance.

The female rabbit named Firouz devised the best plan. She took the king's permission and advanced to the lake to meet the king of the elephants head on. It was hard to get his attention so he climbed on a hill and shouted out to him. When she got his attention, she told the Elephant King that she and her colony of rabbits didn't have the strength to stop the mighty elephant, but the lake had a more powerful being that was more powerful than the elephants.

It was a full moon and the reflection of the moon was shining bright over the water. Firouz told the king of the elephants that if he disrupts the lake by drinking from it or treading over it, the moon, who is more powerful than him and all the elephants, will be mad and seek retribution. As a result, the Elephant King chooses not to disturb the lake and retreats from there to find another place to settle. As a result, because of Firouz's wit, the colony and homes of the rabbits are saved.


The Arabesque put this medieval tale together in the form of a decorative rustic shadow box using mosaics, painting, vintage figurines, and other forms of media to recreate this scene in a home decor piece.

It is truly one-of-a-kind.